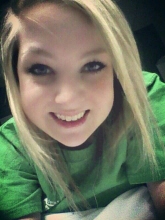 Hannah N. Martin, 22, of Summerville, SC died March 16, 2015 at The Medical University of South Carolina after an extended stay. Hannah was born September 2, 1992. She is the daughter of Julie Martin of Summerville, SC and Chris Martin of Graham, Florida. She is survived by her son Corbin Rittinghouse of Summerville, SC, a sister Melissa Henry and Josh Henry of Louisville, Kentucky. Her maternal grandparents James Corbin and the late Barbara Corbin of Summerville, SC, her paternal grandparents Bill and Ethlyn Martin of Graham, Florida. She is also survived by Uncle Bruce Owens (Vilma) of Summerville, Aunts Deborah Sullivan Gray (Archie) of Ridgeville SC, Pam Morgan and Mert Cahoon of Summerville. Shis is also survived by numerous friends and cousins. Hannah attended school in Summerville. Hannah battled Cystic Fibrosis her entire life. Services will be held at Crossroads Community Church on Gahagan Road in Summerville at 2:00 pm Sunday, March 22, 2015. In lieu of flowers if you would like to donate to a fund set up for her final expenses and the care of Corbin at GoFundMe.com, Funds for Hannah by James Corbin. Arrangements by Palmetto Cremation Society, Charleston, SC.
To order memorial trees or send flowers to the family in memory of Hannah Noel Martin, please visit our flower store.