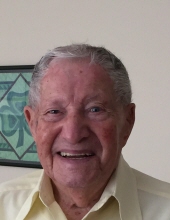 Henry Joseph Quigg, 99, of Charleston, husband of the late Ellen P. Quigg, entered into eternal rest on Monday, April 26, 2021.He was the son of the late James Quigg and Rose Mullan Quigg, born in County Derry, Northern Ireland on May 3, 1921.

Henry had many fond memories of growing up on his family’s farm in Ireland and the experiences he gained from hard work. He graduated school at the age of 16 and declared that he was always the teacher’s pet.

Henry left Ireland at age 16 and made his way to England. He joined the British Navy at age 18 and his service continued for thirteen years. He met his wife, Ellen, while his ship was in port for repairs at the Charleston Naval Shipyard. He married Ellen three months later and they spent 71 glorious years together. Henry was employed by West Virginia Pulp and Paper Co as a powerhouse operator. He admitted many times that his experience in the British Navy landed him this wonderful job. In 1960 the Quigg’s made their home in Eastwood on James Island for 52 years. They were faithful members of The Church Of The Nativity on James Island.

Henry is survived by a sister, Kathleen Henry of N. Ireland. He is predeceased by his wife, parents, brothers, James, Frank and Hugh Quigg and a sister, Mary Tillman.
The family wishes to express their gratitude to the staff at Brookdale Assisted Living and NHC West Ashley for providing excellent care and a loving environment for Henry.
The Mass of Christian Burial will take place at a later date.

Memorials may be made in Henry’s memory to: The Church Of The Nativity 1061 Folly Road Charleston, SC 29412
To order memorial trees or send flowers to the family in memory of Henry Joseph Quigg, please visit our flower store.