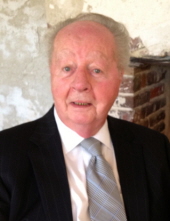 Throughout his adult life, Bob always held a special place for Drayton Hall located just outside of Charleston. Bob had the great fortune to visit the iconic 18th century Palladian estate in the 1960s, while it was still owned by the Drayton family, and returned in the 1970s to help open Drayton Hall as a historic site of the National Trust for Historic Preservation. Serving as Interim Executive Director on occasion, Bob’s passion for interpreting and presenting history touched countless individuals through his magical tours as Drayton Hall’s Senior Interpreter for nearly four decades. In 2012, Drayton Hall established a fund in Bob’s name to honor his dedication to Drayton Hall and our shared American past.

Bob remained active in retirement. He was an enthusiastic gardener and chef, whose Thanksgiving dinners were widely regarded as culinary masterpieces. Bob was active in many local causes, and was a dedicated parishioner at St. Stephen’s Episcopal Church on Anson Street in Charleston.

Bob married his husband, David Johnson, in 2016. They resided happily on Ashley Avenue in Charleston until Bob’s passing. Bob is survived by David, as well as by his nephews and nieces, Craig, Shelly, Keith, Lisa and Kyle Thompson, and his cousins, Dr. Margaret M. Coyle of Asheville, North Carolina, with whom he shared many adventures, John, James and Ellen Coyle.

Memorial arrangements will be the subject of a further announcement. In lieu of other remembrances, donations in celebration of Bob’s life may be made to St. Stephen’s Episcopal Church, 67 Anson Street, Charleston, South Carolina 29401, or to Drayton Hall, 3380 Ashley River Road, Charleston, South Carolina 29414 for the Robert E. Lee Barker Interpretation Fund.
To order memorial trees or send flowers to the family in memory of Robert E. Lee Barker, please visit our flower store.