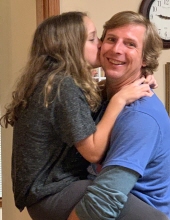 Tommy was a man of MANY words with a particular flair for language of the colorful variety. When he entered a room, he took up ALL of the space in it. One of his greatest joys was to keep everyone around him laughing often with a movie quote or song lyric. He loved and laughed with every ounce of his being. His passion for everything from music to Alabama football burst out of him without any reservation. Light didn’t have to shine on Tommy; it shone from him and warmed every person who was blessed by his presence. He never missed an opportunity to say “I love you” and had the most tender, loving heart – the kind that ached and made him cry when leaving his Alabama family after Christmas was over each year.

Tommy's greatest accomplishment was the family he made for himself in Charleston with his wife, Carrie, and their precious 12-year-old daughter, Bentley. There are no adequate words to describe his love for his family. If you spent any time at all with Tommy, you would know how proud he was to be Carrie’s husband and B’s dad. Tommy and Carrie met at Vickery’s in 2006 when Carrie was a bartender and Tommy joined the staff as a bar back, so basically she has been telling Tommy what to do from the moment they met. Over the last 14 years, Vickery’s has served as more than a place of employment – it is the home of an extended family of special friends who have meant the world to Tommy, Carrie, and Bentley.

In spite of the devastating heartbreak of losing Tommy, he would want everyone who loved him to turn up the Grateful Dead as loud as possible (then a little bit louder) and have a good laugh. He’d rather we tell tales of some of his greatest hits such as his pet snake that got loose in his first car and met it’s untimely demise in the air-conditioning vents – a fate his passengers were reminded of every STINKING time it was Tommy’s turn to drive somewhere. Or the time in high school when he, his brother, Casey, and others (names redacted to protect the guilty) went “camping” resulting in a free ride in a police car and George’s most legendary punishment the next day – push-mowing all 6 acres of the yard in blazing Alabama heat with queasy stomachs and splitting headaches.

It is difficult to think of Tommy without smiling, which is exactly the way he would like it. The best way to honor his life is to remember him with a funny story, a song, and a promise to never miss a chance to tell someone, “I love you.”

“The story teller makes no choice. Soon you will not hear his voice.
His job is to shed light, and not to master.” – Grateful Dead (Terrapin Station)

The family will have a private memorial service in Columbiana, Alabama. There will also be a Celebration of Life service at Vickery’s Bar & Grill in Mount Pleasant on Sunday, July 19th. In lieu of flowers, donations can be made to support Carrie and Bentley through the following link: https://www.freefunder.com/campaign/tommy.
To order memorial trees or send flowers to the family in memory of Thomas Benson Barnes, please visit our flower store.