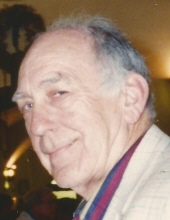 Walter J. Van Ast passed peacefully the morning of June 14, 2019. Walt was 93 years old and was predeceased by his ex-wife Sara Van Ast, his son, David Van Ast, his sisters Cora Woodhams, Margaret LaQuerre and Elsie Levy and his faithful beagle, Rusty. He is survived by his son and daughter, Stephen and Nancy Van Ast, grandsons Logan and Cameron Smith and granddaughter Heather Agins.

Walt was born in 1926, the son of Mert Van Ast and Anna Ocke Van Ast, who immigrated from Holland in 1913. Walt spent most of his life in NYS but later moved to Port Richey Florida and eventually to Ladson SC to be near his daughter.

Walt as a child was labelled as ‘stupid’ due to suffering dyslexia in a time that the condition was unknown, undiagnosed and untreated. Despite this and PTSD from his military service he had a zest for life and was a man of strength and determination. He loved a challenge and would study, research and successfully pursue new goals.

After serving in the Navy on the USS Auburn during WWII he graduated from college and taught school for a period. His real passion was as a business owner. He owned a number of thriving businesses in New York State; Van Ast Mason Contracting, Hamlin Diner, Hamlin Auto Sales, Hamlin Lawn Equipment and Albion Pool Hall. He also used his business acumen to become a successful stock market investor.

He built two homes, one in Hamlin, NY and later, another in Holley, NY. He had an adventurous spirit and became a certified IFR private pilot, owning his own plane and flew with his wife to California and back. He also became a horseman, owning three horses that he rode for pleasure and in local parades.

Walt was a generous man with his time and expertise, and was active with his Masonic lodge.

He will be dearly missed for his love, kindness, and practical wisdom. He was sustained by the ‘Serenity Prayer’ which we now rely on to get through these difficult days.

Many thanks to the VA for their excellent care, especially in the CLC unit, and to Amedisys that made it possible for Walt to remain at home as long as possible.
To order memorial trees or send flowers to the family in memory of Walter J Van Ast, please visit our flower store.