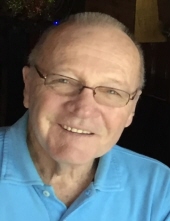 William Richard Fry (Dick) passed away at Lowcountry Community Hospice House in Summerville SC on 12/21/21 at the age of 85. He was a longtime resident of Harborcreek PA until he moved to South Carolina in September 2020.

He is predeceased by his parents William and Maxine (Stewart) Fry and his brother Roy (Bud) Fry. He is survived by his wife of 61 years Sandra (Petersen) Fry. They were married in Mayville NY in July of 1960. He is also survived by his brother, Jack Fry (Jo-Ann) of Virginia Beach, VA, two children Andrew (Kelly) and Kristin Fry, both of Charleston SC and grandchildren Erin Fry of Chicago IL and Nolan Fry of Malden MA.

Dick was born in Dunkirk, NY in 1936. He graduated from Mayville Central School in 1955 and went on to graduate from the apprentice course program at General Electric in Erie. He worked at GE as a draftsman for several years and then worked the majority of his career at Erie Industrial Supply Company as a salesman.

Dick had a wide variety of interests. As a young person he participated in many sports. As an adult, he maintained his sports interests by coaching youth baseball. He was a passionate hunter, but also loved singing in the Lawrence Park United Methodist Church choir. He became active at the Erie Playhouse where he volunteered in many musicals and plays, both on stage and off. He was very proud of his time serving on the Erie Playhouse Board of Directors and he also served many years on the Harborcreek Township Zoning Hearing Board. He loved summer; gardening, boating, water skiing, and sailing were favorite pastimes.

There will be no visitation at this time. His family may hold a celebration of life in the coming months. Memorials can be made to the Erie Playhouse (13 W 10th St. Erie PA 16501) or the Lawrence Park United Methodist Church (4015 Niagara Pl. Erie PA 16511).
To order memorial trees or send flowers to the family in memory of William Richard Fry, please visit our flower store.