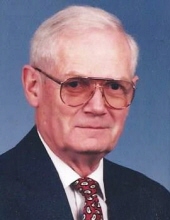 Bill was born in Fairfield, VA., to William Thorne Borthwick and Blanche (Polly) McCluer Borthwick. He grew up in Lexington, VA. After graduating from Lexington High School, he attended Virginia Polytechnic Institute, graduating in the class of 1950 with a degree in business administration. His two years of service in the United States Air Force were spent in Fairbanks, Alaska, during the Korean Conflict.

Bill returned to Virginia and worked for Dan River Mills. He married Anne E. Crowgey in Roanoke, VA, in 1955. He and Anne spent most of their 63 years of marriage in Gaffney, SC, rearing four daughters (and always a pet cat or two), with Bill working as an industrial engineer with Milliken in Spartanburg. A lifelong inventor and amateur photographer, Bill enjoyed keeping his 1965 Mustang in top form, tinkering in his “little house” with carpentry, mechanics, and creative solutions to everyday problems, and spending as much time as possible with his family at their cottage on Lake Lure in North Carolina.

Friends are invited to join the family Saturday, March 9, between 4 and 6 pm, at the Bouton home on James Island, for a casual drop-in to celebrate Bill’s long life. A memorial service will be held in May in Wytheville, VA.

Online condolences may be viewed or shared at www.palmettocremationsociety.com
To order memorial trees or send flowers to the family in memory of William Thorne Borthwick, Jr., please visit our flower store.