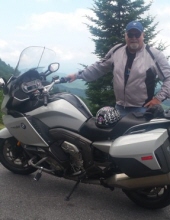 Baxter is survived by his mother, Marian T. Robinson; wife, Elizabeth Gearhart; daughter, Sara Lynn Robinson; grandson, Noah Galvin Boehm; siblings, Brother Paul Lewis Robinson and Sister Noreen Robinson-McCollum. Nieces and Nephews - Misty Barwick, Michael Robison, Tiffany Robinson, Hyrum A Simms, Robert J McCollum. Several grandnieces and nephew and too many friends to list Father, James L, Robinson, and nephew, D. Wesley Simms, precede him in death.
Baxter was born on 11/25/1955 in Wiltshire, England to Marian and James Robinson. He was an Operations Specialist in the US Navy on the Guided Missile Cruiser USS Wainwright. His service took him on numerous cruises to the Mediterranean, Black Sea, and Caribbean. He attended the Bicentennial International Naval Review in New York harbor as crew on the flagship Wainwright. He graduated from the College of Charleston upon completion of his military service. He worked while in college at the Veterans Administration Hospital assigning veterans to various positions at the facility.

Baxter enjoyed hunting, fishing, sailing and his motorcycle. He was always there for his friends, many who were close to him for over 40 years.