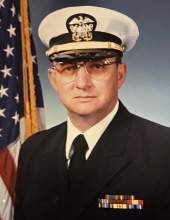 He had a full life with family and friends that love him. His special highlight was his Hole in one after many years of golfing! He had his 80th birthday with cake and few family members! He grew up in Hickory, NC and upon turning 17 he joined the Navy in 1958 and retiring in 1991 after serving over 30 years as both a Hospital Corpsmen and Medical Service Corps Officer.

He had lots of sea stories to share. We are Navy family with his Granddaughter, Lucy, now on active duty in Norfolk, VA. He was the second child born to the late Louis Duncan, SR, and the late Velma (Duncan) Buchanan. His was preceded in death by his sister, Loretta and survived by his brothers: Louis Jr. (Fern deceased) Phillip (Susan), and sisters: Kathy (Butch) and Debbie (Dennis) and brother-in-law Lane all of NC. Bud married Fran (Smarr) Little of Weston, WV in May 1962 at his mother’s home in Hickory, NC as a young sailor. They had two sons: Frank and Tony. He then married Gail (Quigley) De-Phillips in 1981 in New Orleans and had a daughter Carrie and son Chad.

He married on his 50th birthday in 1991 to Judy (Holmes) Duncan in New Orleans. In 1997 he had a stroke but was lucky to have his large family to make many memories over this past 24 years; including his siblings and their families and many nieces and nephews. His children included Frank (Gail) and Tony of WV and Carrie (Dominick) and Chad of New Orleans and his wife ‘s two sons Loyd of TN and Lance (Jennifer) of WA and her 4 stepchildren Debbie (Jim), Linda (Steve) Ken Jr. (Kellye) and Kevin (Keith). The Pickett-Muncy-Duncan Grandchildren include: Mark (Rhonda), Lucy, Molly, Phi, Preslie, Gracelyn, Ashley Lyn (Josh), Drake, Aiden, Ashley Rose, Lake, Melu (Nathan), Amber, Crystal (Kevin), Cathy (Taz), Ken III (Glenn), Kyle (Jamie), Korrey, Kristyn and Shauna. Great-Grandchildren not only include many Muncy but also Grayson and Owen of FL and Remi and Ty of TN. He also survived by his sister-in-law’s Gail Holmes, Bobbie Ress, and Millie Schuman.

ARRANGEMENTs by Palmetto Cremation Society of North Charleston, SC,
To order memorial trees or send flowers to the family in memory of Carl Duncan, please visit our flower store.