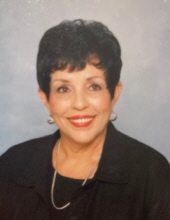 Carol Rae Ramirez, the daughter of the late Angel S. and Loraine D. Ramirez of Charleston, SC, entered into eternal rest on Sunday May 23, 2021. Along with her parents, Carol was preceded in death by her beloved sisters, Beverly R. Boltin and Anita R. Avinger and her nephew Stephen R. Avinger. Carol is survived by her brother Carlos Ramirez (Judy), and her four nieces, Jan Coulter (Barry), Maria Zidlick (Bill), Angelique Ramirez, and Renee Johnson (Dustin) as well as seven grand nieces and nephews and one great grand-niece. Carol was a native Charlestonian who grew up and lived in West Ashley all of her life. She graduated from St. Andrews High School and Palmer Secretarial College. Throughout her life, she worked at Hay Oil Co., the Charleston Naval Shipyard and had a long career with Estee Lauder at both the South Windermere and Citadel Mall Belk from which she retired. Carol was a devoted, lifetime member of Ashley River Baptist Church where she sang in the choir. Carol was known for her beautiful singing voice and was the soloist at countless Charleston weddings. She will be dearly missed by her friends and family.

A Memorial service will be held at Ashley River Baptist Church at 1101 Savannah Highway, Charleston, SC 29407 at a day/time to be announced in the near future.

Memorials may be made in her name to Ashley River Baptist Church or your favorite charity.
To order memorial trees or send flowers to the family in memory of Carol Rae Ramirez, please visit our flower store.