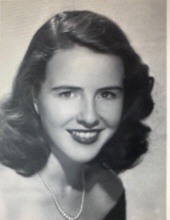 Caroline Brown Williams, 87, of Mount Pleasant, SC, passed away peacefully at home after an extended illness on November 15, 2020.
She was born April 15, 1933 in Orangeburg, SC to Guerard Fuller "Moonie" Brown and Caroline Summers Brown. She lived in Charleston until age 11 when her family moved to Sullivan's Island. She graduated from the College of Charleston and married to Bill Williams, a Citadel graduate, in 1954. She was a mother of 6 children, grandmother of 8 grandchildren, and great grandmother of 8 great grandchildren.
She and her late husband Bill moved to Lubbock, TX and later Sacramento, CA where he served in the Air Force before returning to Sullivan's Island. She served 1 year in the Civil Air Patrol and later worked as a chemist at the W. VA Pulp and Paper Co. and Bill joined the Postal Inspection Service. She and her family moved to Mobile, AL and later to Lexington, SC where she did some substitute teaching at Pelion schools. She loved her family most of all. She was a member of Christ Church in Mount Pleasant and had tutored elementary school children in Reading as part of the IBEAM program. In her later years, she enjoyed learning about personal computers, working Sudoku puzzles, and playing cards.

In addition to her parents and husband, she was predeceased by her sons William "Billy" Williams and Clint Steele; her brother G.F. "Sonny" Brown, Jr. and close lifelong friend, Elaine Dawson of James Island, SC.
She is survived by daughters Ann W. Stevenson of Conway SC, Karen Williams of Mount Pleasant, SC, Susan W. Kiser of West Columbia, SC, and DD W. (Michael) Manning of Lexington, SC, her brothers George (Linda) Brown of Beaufort SC, Emory (Patricia) Brown of Isle of Palms, SC; her sister Virginia (Douglas) Henderson of Mount Pleasant, SC and her sister-in-law Lois W. Marble of Augusta, GA. She is also survived by 8 grandchildren, 7 great grandchildren. and 31 nieces and nephews.
The memorial service for Caroline Brown Williams will be held at 2pm on Saturday, November 21st at Christ Church Anglican located at 2304 Highway 17 North, Mount Pleasant, SC 29466. In lieu of flowers, please consider a memorial gift to Christ Church Anglican.
To order memorial trees or send flowers to the family in memory of Caroline B Williams, please visit our flower store.