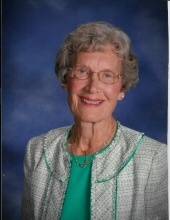 Catherone Chell Tilley, age 96, departed her earthly life on Easter Sunday, April 12, 2020. Born on January 3, 1924, she was the daughter of Beulah Hare Chell Jones and William Chell. She lived the early years of her life on what was known as Old Joppa Farm, a 600 acre farm which was developed into Joppatowne, Maryland in the 1960’s. She lived through the Great Depression, accompanying her mother to Baltimore to sell dairy products and later helped when the farm grew various vegetables. At age 16, after graduating from Old Post Road School, she was employed by Chesapeake and Potomac Telephone Company and later worked as chief operator in the Signal Corps at Edgewood Arsenal. On December 7, 1941 during the attack on Pearl Harbor she solitarily worked the switchboard, patching emergency calls to Army officers.
Catherone was a lifelong Lutheran. As a member of Trinity Lutheran Church, she sang in the choir, taught Sunday School and helped launch the church’s first parochial kindergarten as its first teacher. After moving to Spartanburg, SC with her family in 1971 she was a member of Holy Communion Lutheran Church for over 40 years.
Catherone is preceded in death by her husband of 62 years, William Reeves Tilley and her three siblings, Marie Chell, William Chell and Frank Chell all of Joppa, Md. She is survived by her two children Karen Tilley Jones (Martin) and Scott Tilley (Tana) and her four grandchildren Chris Tilley (Erin), Lauren Tilley Lowe (Eric), Emily Jones Wilkinson (Eric), and Mark Jones (Mellisa).
In later years she continued to love watching things grow, maintaining a garden that fed neighbors, friends and the food pantry, and keeping an eye on a dozen bluebird boxes. She was first and foremost a devoted, loving mother, wife, daughter, aunt and grandmother who taught generosity, responsibility, kindness, and the value of work. She was thrilled to see her four grandchildren enter into loving marriages and meet her six precious great-grandchildren. She maintained her independent nature and keen wit throughout her life, asserting, “Don’t get me anything that has more than one button to push.”
A service to celebrate her life will be held at a later time when circumstances allow. In lieu of any memorial gifts, please support your local food pantry, Feeding America.org, or The Lowcountry Food Bank.org.
To order memorial trees or send flowers to the family in memory of Catherone Chell Tilley, please visit our flower store.