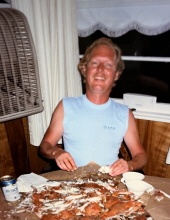 Charles Edward Hurley, Jr., 69, of Summerville, SC, passed away, peacefully while holding his daughters hand, on February 26th. Upon hearing of the news, executives with Miller Brewing held an emergency meeting to brace for the impact of the loss in sales revenue.

A Master electrician, Charlie spent his career running a successful business and was a member of the International Brotherhood of Electrical Workers - Local 26. He also spent many days at Zagami Construction helping his uncles with “urgent work” – eating crabs and watching movies. After retiring, Charlie spent his days working in the yard, battling squirrels, fixing his family’s cars and tinkering in his garage workshop while watching Jerry Springer or The History Channel. Charlie had many inventions and held a US Patent for his favorite one – a spark plug boot puller, affectionately named after his favorite (shh, don’t tell the others) brother in law, The Tommy. Charlie, the oldest of 7 children, was born on February 29th, 1952 to Rita and Charles Hurley, Sr., in Washington, DC. Charlie had a very spirited youth with his best bud Larry by his side (no one can ever “prove” how that ball field fire started).

He was predeceased by his parents and his brother Joey. He will be tremendously missed by his wife, Kathleen; his daughters (also lovingly known as “the Goddamn kids”, we love you too Dad!) Angela (James), Melissa and Michelle (Jeffrey); his grandchildren Nicole, Mathew and Sofia; his many nieces (especially Jennifer, who walked to him first) and nephews; siblings, Linda, Tommy, Janie, MaryAnn and Patty, and family & friends. Charlie’s family and friends are incredibly saddened by his passing but know he is now sorting through the pile of junk Pop has been saving for him in heaven.

There is no service scheduled at this time because “who wants to have a bunch of people standing around sad and awkward? Just give me a beer and let me be with my memories”. Charlie’s ashes will be scattered in his heaven on Earth, his beloved Potomac River, at a later date.

To order memorial trees or send flowers to the family in memory of Charles Edward Hurley, Jr., please visit our flower store.