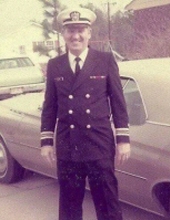 He grew up in Hamlet, NC, and after graduating from Hamlet High School in 1949, he enlisted in the U.S. Navy. He served as a cryptographer in the Naval Security Group his entire career. He progressed through the enlisted ranks attaining the grade of Senior Chief Petty Officer (E-8, CTCS) in 1957. He was commissioned as an Ensign in 1962, and rose to the rank of Lieutenant Commander (O-4, LCDR). He served in Hawaii, Charleston SC, Cheltenham MD, Morocco, Pensacola FL, Edzell Scotland, Ft. Meade MD, and Bangkok Thailand. His “twilight” tour was in Charleston SC. He retired in 1975 having completed 26 years of service. He and his wife resided in Summerville SC.

Prior to retiring from the U.S. Navy, he received his Bachelor’s degree from Baptist College of Charleston. He then worked as a guidance counselor at Alston Middle School in Summerville. He also earned a Master’s degree from the Citadel. He was a very active member and leader in the local Civitan Club. He also served in many positions as a member of St Luke's Lutheran Church in Summerville, SC.

He was preceded in death January 17, 2017 by his wife of 64 years, Nancy. He is survived by: two children, Clyde Wilson III, wife Cristie of Mechanicsville, VA. and Cindy Barnett of Summerville, SC, seven grandchildren and five great-grandchildren, three sisters, Ruth Wilson Campbell, Yvonne Wilson Graham, both of Hamlet NC and Nancy Wilson Pollard of Durham, NC, and numerous nieces, nephews and great-nieces and great-nephews. The family would like to thank his caregiver Chrissy who was so devoted to him during his time of need.

Clyde was preceded in death by his parents Clyde Sr. and Julia Wilson, brothers Donald and Ralph Wilson, and sisters Geraldine, Carolyn Carter and Faye Jordan.

He was very much a people person and cherished his friendships with his HHS 1949 classmates and all of the people he served with during his time in the Navy, worked with in the school system, and St. Luke's. He was also an active member of the Naval Cryptologic Veterans Association (NCVA). Once he made a friendship, it was a friendship for life. He loved his God, his family, his friends and his country.

Memorials in Clyde's memory may be made to the ARK ministry (Alzheimer's Respite Care) to St. Luke's Lutheran Church, 206 Central Ave., Summerville, SC 29483.
To order memorial trees or send flowers to the family in memory of Clyde Eugene Wilson, Jr., please visit our flower store.