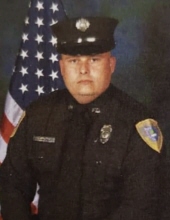 Darin Kingery was born on November 4th, 1977 in Charleston SC. After high school, Darin pursued a career in the fire service where he devoted most of his life to. He retired from the North Charleston Fire Department as an Engineer. Darin, was best known for being a South Carolina Fire Instructor. He received his Masters degree in Business Administration at Southern Wesleyan University. Darin, spent most of his years in retirement sharing his love and excitement for Disney and Star Wars with his beloved family. He enjoyed playing Chess, watching movies, cooking with his Son, Ethan. All while watching his favorite college football team, the University of South Carolina Gamecocks.

Darin Kingery, was preceded in death by his parents: David Leonard and Fairy Kingery. His brother: Eric Fabre

He is survived by his beloved wife; Shari Kingery. Four sons; Ryan, Ethan, Patrick and Kyle of Summerville. Brothers; Brian Fabre of Bonneau and Michael (Kim) Kingery of Summerton. Sisters; Cayce (Cory) Chappell of Coatesville, PA and Shannon Kingery (Mike Nelson) of Holly Hill. As well as several Nieces and Nephews.
To order memorial trees or send flowers to the family in memory of Darin James Kingery, please visit our flower store.