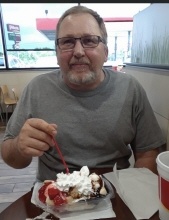 With heavy hearts, we announce that Donald “Donnie” Carroll, 57, passed away May 5, 2021; from complications due to throat cancer. Donnie was born on June 30, 1963, in Wilmington, NC, to James “Clyde” Carroll, Sr. and Gertrude Carroll of Loris, SC. Donnie was preceded in death by his parents; his brother, James “Buddy” Carroll, his sister, Dorothy Mandeville, his brother-in-law Richard Mandeville, and three nieces, Janice Byers, Cathy Hollingsworth, and Sandra Smith.


Donnie was raised in Jedburg, SC. Donnie was a uniquely gifted natural stone craftsman and mentor for over 25 years in Charleston, the Islands, and Columbia, SC. He loved to “make kitchens rock,” all along the Southeast Coast; from the U.S Capital, all the way past the Atchafalaya. Donnie fought for his family like a true superhero, since formally beginning his battle with throat cancer on June 24,2019. Donnie's humor, and passion for his family and friends, will continue to be celebrated in the hearts of those who love him. When it came to work ethic, quality control, and Donnie's large family, his favorite saying was “often imitated, never duplicated.” Perhaps, it is the best way to describe his love, his life, his accomplishments, and the overwhelming sense of joy he will forever bring to the lives of those who love him.

Donnie is survived by his wife of 29 years, Shellie Hildreth Carroll; his four daughters, Rachel Lynn Carroll (Stephanie Riley), Elizabeth Hildreth (Carroll), Rayann Carroll (Chris Wilson), Adalee Carroll (Iroquise Bryant), two sons, Adam Shea (Tammy Pace) and Dakota Ray Carroll. One sister, Annie “Pearl” Babson Myers. His granddaughters, Veronica Williams, Riley Williams, Hannah Shea, Au’brayonna Bryant, and his beloved grandson, Lucian Carroll. Donnie cherished building life with his brother from another mother, James “Jimmy” Blanton (Lorraine Blanton, “LB”), and his best friends, Ronnie Judy and John Smith. Donnie was a true aficionado of his trade, who enjoyed bringing on apprentices, and sharing his skills in trade with his brother in laws, Thomas Hildreth (Crystal Montjoy), and Robert Hildreth. His father in law, Thomas “T.J.” Hildreth, his sister in law Anjanette “Angie” Perce (Jarrod Perce), as well as many nieces, nephews, cousins, and friends that he cared for as his “bonus children”. Donnie's zeal for life, loyalty as a friend, integrity as a craftsman, humor as a compadre, and rhythm as a rock star will be remembered by his family, friends, and many chosen children.

A formal Celebration of Life is scheduled for Saturday, May 15 at 3:00pm at the family residence
To order memorial trees or send flowers to the family in memory of Donald Ray Carroll, please visit our flower store.