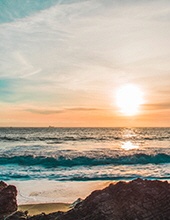 Dorothy Graham Jenkins, 99, of Mount Pleasant, South Carolina passed away April 22, 2019, after a brief illness. Dorothy was born in Charleston, Nov 26, 1919. She was the daughter of Elizabeth Campbell Graham and Harry Joseph Graham and one of six children. Upon the passing of her father in 1935 she and her older sister Elizabeth had to leave school in order to help their mother raise their younger siblings. She also had to give up her coveted position on the school basketball team. Later in life she remained a serious basketball fan, recently following Duke's progression in the NCAA tournament. During her early working life, she worked as clerk for various law firms on Broad street. On September 1, 1940 while rescuing a friend from the surf on Sullivan's Island, she and another friend Peggy Maginn also became distressed and had to be rescued from drowning. This event did not dampen her love for the beach, which she maintain for the rest of her life, subsequently, making frequent trips with her extended family each summer. In recent years she regularly went out to Breach Inlet to look at the ocean. On May 10, 1947 she married Wallace Earle Jenkins at Second Presbyterian church in downtown Charleston. In 1953, they became among the first residents of the Groves in Mount Pleasant and joined St. Andrews Episcopal Church where she remained an active member until her death. She was primarily a stay at home mom who volunteered for organizations her children were involved with. However, when her husband became disabled in the late 1960's, she went back to work as a clerk at the Charleston County Board of Voter Registration, where she continued to work until retirement in1989, at age 70. For a number of years she was the primary care giver, simultaneously, for both her husband and mother. Beginning in the mid 1980's after their respective passing, she transitioned into volunteering at the church and helping care for her grand children. For over 16 years she enjoyed spending Christmas holidays at Snowshoe, West Virginia with her family. Her fierce independence and determination allowed her to remain in her home and care for her daily needs right up until a month before the end of her life. We will miss her at the pool this summer. She was preceded in death by her mother and father, her husband Wallace and all of her siblings including her sisters Margaret (age 5), Elizabeth, and Ruth Parr, her brothers Harry and John and a daughter in law, Nan Chipley Jenkins. She is survived by her son Wallace E. Jenkins Jr. (Michele Hoisington) of Mount Pleasant, a daughter Lynne J. Weldon (Richard) of Aiken, SC and four grandsons, Richard M. Weldon of Charleston, Micah K. Jenkins and Graham K. Jenkins of Mount Pleasant and David G. Weldon (Lauren) of Chicago, Illinois, and 5 great grandchildren. She is also survived by many nieces and nephews on both sides of the family as well as two sisters in law, Amanda Jenkins Doscher and Annabelle Rumph Jenkins.
The family owes a great sense of gratitude to the staff of Savannah Grace Nursing facility for their kind and gentle care during these last days and to Roper Hospice. Dorothy's funeral will be at a later date and will be private. In lieu of flowers, donations may be made to St. Andrews Church, Building Fund, 440 Whilden St., Mount Pleasant, SC 29464.
To order memorial trees or send flowers to the family in memory of Dorothy Graham Jenkins, please visit our flower store.