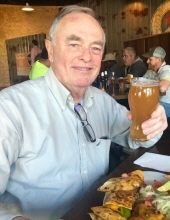 Douglas F. “Doug” Whelan, 80, died peacefully with his wife by his side on Wednesday
January 12, 2022. Doug had a long and happy life and always had a big smile on his face.
Doug was diagnosed with Alzheimer’s 8 years ago. His family had lovingly taken care of him
at home until his Alzheimer’s had progressed and he was admitted to
memory care 5 months ago. Even then he came home several times a week to enjoy
some of his favorite things; a meatloaf dinner, chocolate ice cream, time with the family
dogs, boating with the granddaughters, being with family and occasional visits to
Peckers with good friends. He spent an afternoon home with his wife and children and
the dogs just 5 days before he passed. He even had a bowl of ice cream.

Born in Rockville Centre, NY on May 4, 1941 to Elizabeth and James Whelan, he grew
up on Long Island with 2 brothers and 3 sisters. Doug spent summers out on the north
shore of Long Island boating, fishing, swimming, water skiing, and eventually spending
summers in the ‘barn’ on Old Harbor Lights in New Suffolk, NY. The ‘barn’ was literally
a barn that his father purchased and Doug helped to renovate first as a young boy with
his dad and uncles and again as a married man with his brother-in-law’s. Doug and his
young family loved spending summers and holidays there until he, and Trisha, made
several career moves to places far and wide.

Doug graduated from Nassau Community College with an Associate’s in 1964, and from
Hofstra University with a BA in 1966. He started his career at Price Waterhouse Co. in
NYC shortly after graduating but was drafted into the Army in October 1966, where he
eventually met his wife, Trisha. Doug graduated in the top of his basic training class
receiving the American Spirit Honor Medal in January 1967. He was honorably
discharged in October 1968 as a Specialist Fifth Class. Upon being discharged he went
back to his position with Price Waterhouse Co. in NYC where he spent another 4 years
before going into private industry as a CPA with Loctite in Newington, CT. Doug
worked until he was 71. He retired at the end of 2012 from Duke Clinical Research
Institute in Durham, NC where he worked for 15 years. He loved his time at Duke and
all the people he worked with there.

In December 1970, he married Trisha Coulombe and together they lived in seven
different states as well as abroad in the Netherlands over their 51 years of marriage.
Their last move to Charleston in 2016 was to be closer to their daughter Holly, son-in-
law Michael and granddaughters Addison, Ansley, and Alivia. Son, Shawn, moved to
Charleston in 2017 to help with Doug’s care.
Doug loved his family, boating, dogs, beer, chocolate ice cream, ketchup on everything
of course, and a good party. He often combined all of them on whatever boat he had at
the time. Throughout their married years Doug and Trisha owned more than 20 boats
(if you count the dinghies about 26). For many years, son Shawn worked alongside
Doug restoring or ‘flipping’ the boats.

Doug was adventurous and loved life. He was his happiest when he was on the water
surrounded by friends and family, along with a dog and a cooler of beer. Some of his
greatest times were in Charleston, where he enjoyed nothing better than being taken on
a boat ride with the Holly and Michael and watching his granddaughter’s out on the
water. He will be remembered for always having a good laugh and thinking he caught
one of us unawares by saying “gotcha!” He would laugh at any joke especially the
ones he told! He was affable, kindhearted, helpful (often to strangers) and loving. He
will be remembered for his beautiful smile, sparkling blue eyes, crazy hats, sense of
humor and infectious laugh.

Doug is survived by his loving wife Trisha, his daughter Holly Culp (Michael), son,
Shawn, and four beautiful and talented granddaughters: Addison, Ansley and Alivia
Culp, and Rylie Whelan. He is also survived by his brother, Jimmy Whelan (Maureen),
and sisters, Betty (Friemann), Lynn (Hank) Reinecker, and Kathleen (John) Tierney. As
well as many loving nieces and nephews and in-laws to list here. He loved them all and
was the one who taught many of them to drive a boat, waterski, and sail!!

Doug enjoyed working in the yard and improved the landscaping in every home he and
Trisha owned. In lieu of flowers, the family would like either outdoor plants for around
the yard to plant in Doug’s memory; or donations to the Charleston Animal Society, at
2455 Remount Road, North Charleston, SC 29406.
To order memorial trees or send flowers to the family in memory of Douglas Francis Whelan, please visit our flower store.