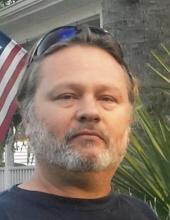 Dwight Wesley " Whitey " Dewitt, 57, of Summerville, entered into eternal rest on Wednesday, May 13, 2020, surrounded by his family at his home.

Born on October 28, 1962 in Walterboro, South Carolina, Whitey was a son of the late Eugene Junior Dewitt and Virginia Elizabeth (Harwell) Wall.

Whitey was a lifetime resident of the Low Country and he worked as a Meat Cutter in the Meat Processing Industry. Dwight enjoyed sharing his sense of humor and playing practical jokes on others. He enjoyed spending time on the water going Crabbing, Shrimping, Fishing and spending time with his animals. He will be missed by his family here but has been welcomed into eternity by those waiting there.

A private gathering of Whitey's family is being held and a Graveside Service will be at 2:00 P.M. Friday, May 15, 2020 at the Tabor Methodist Church Cemetery, Bells Highway at Greene Road in Ruffin, South Carolina.