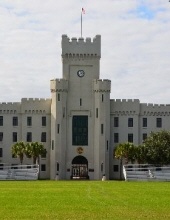 Eugene Frost Lesesne, 84, of Mt. Pleasant, SC, died Wednesday, January 13, 2021. He was predeceased by his wife of 53 years, Anne Johnson Lesesne. His private funeral service will be held Saturday, January 23, 2021 at 1PM in St. Philips Church, 142 Church St. The event will be livestreamed onhttps://youtu.be/UUEWv11PeTw.

Gene was born on January 5, 1937 in Florence, SC, a son of the late Thomas Petigru and Emma Larsen Lesesne. He graduated from Dreher High School and attended The Citadel, class of 1959. Gene was a Naval flight instructor and a member of the Air Force Reserve, retiring as a Lt. Colonel. He flew commercially for Pan AM, traveling the world. He returned to The Citadel in 1969, teaching and coaching, serving as director of intramural athletics until his retirement.

Gene was a faithful volunteer, donating thousands of hours to Water Missions and St. Philips Church. He traveled to multiple countries on mission trips with the church, and on humanitarian trips with Water Missions. Gene was an avid cyclist, logging hundreds of miles per year until his passing. He loved cooking and could often be found in the kitchen at St. Philips, volunteering his talents. One of his greatest passions was donating blood to the Red Cross, along with his family. He had donated over 125 pints in his lifetime. Gene possessed a unique ability to fix almost anything, and loved to help friends, family and those in need.