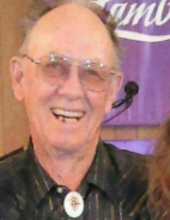 Gaylord Dee Baggerly, formerly of Baker City, passed away Sunday February 4th, 2018 at his home in Bowman, SC. Gaylord was born on July 24, 1939 to Dean & Frances Baggerly in Meridian, Idaho. He ranched in the Keating Valley and was a cross-country truck driver after serving four years in the US Navy. He was very talented with woodworking, welding, cooking and sewing, and he also enjoyed hunting and fishing. Gaylord was diagnosed with lung cancer less than a year before his passing at the age of 78.
Survivors include his wife Linda Schrader of Bowman SC. His brothers Richard Baggerly and his wife, Bonnie, of Echo, OR and Don Baggerly and his wife, Barb, of Baker City, OR. His sons Gaylord Mark Baggerly and Joseph Andrew (Andy) Baggerly of Baker City, OR, and his daughter Rae Ellen Shaner of Olathe, KS. He left eight grandchildren and eight great-grandchildren with one on the way.
He was preceded in death by his parents and his sister Evelyn Mae Stewart.
To order memorial trees or send flowers to the family in memory of Gaylord Dee Baggerly, please visit our flower store.