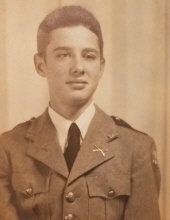 George Fayette Merritt died August 23,2020 in Charleston, SC. Fayette was born in Pensacola, FL to Mr. & Mrs. John A. Merritt, Jr. He was married for 60 wonderful years to Louise Biggs Merritt. Fayette was a graduate of Sewanee Military Academy and the Coast Guard Academy. He served for 20 years in the Coast Guard, retiring as a Commander. He met Louise while stationed in Texas. After retiring from the Coast Guard, they moved back to Pensacola to raise their children. Fayette went on to get his MBA from University of West Florida and worked as a CPA and a marine surveyor. Working for himself allowed Fayette to spend time with his family, attending track meets, football games, basketball games, soccer games, driving car pools, and he especially enjoyed teaching swimming. His grandchildren, Curtis and Cristall, were the lights of his life. He loved the water and the beach, visiting his in-laws in Texas and his daughter in Charleston. He could often be found with Louise at an African Violet Show or Garden Club function. He and Louise were blessed with a long life together and truly enjoyed spending that time with each other. They have been a wonderful example to all who knew them of happy people raising their children, spending time with their grandchildren, and enjoying each other’s interests and hobbies.
Fayette was preceded in death by his brother, John A. Merritt, III, and two sisters, Mary Dawkins and Betsy Harrison. Fayette is survived by his wife Louise, son George F. Merritt, Jr. (Diann), daughter Bonnie Miley (Bob), grandson George Curtis Merritt (Kelsea), granddaughter Cristall Merritt (Jake), and numerous nieces and nephews. A private service will be held in Charleston at this time. At a time in the future, a funeral mass and celebration of life will be held in Pensacola, FL. In lieu of flowers, the family asks that memorials be made in Fayette’s name to one of the following: Alzheimer’s Foundation of America (https://alzfdn.org/support-us/), National Hospice Foundation https://nhpco.org, Respite Care Charleston, https://respitecarecharleston.org/, or a charity of your choice.
To order memorial trees or send flowers to the family in memory of George Fayette Merritt, please visit our flower store.