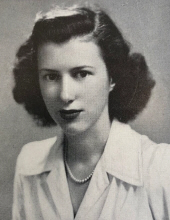 Gwelda Casoli, 97, of Charleston, SC Died peacefully in her home on Friday November 6.
She went to Mount Holyoke for her undergraduate degree in physiology, Phi Beta Kappa .
For graduate school she went to Vassar, earning a master’s degree in physiology. Her career included positions at Harvard University, Memorial Sloan Kettering Cancer Center, and Montclair College. She worked in research, teaching and later as a librarian.
She was born in Canada, raised by her aunt and uncle. As an adult she lived in New York, NY, Cedar Grove, NJ, and most recently Charleston, SC.

She was predeceased by her daughter Francesca Casoli Shira and husband Armando Casoli.
Gwelda and Armando were world travelers, benefiting from his position at PanAm to travel extensively. They often went back to Genoa, Italy, where Armando had grown up. Their favorite memories were of trips they took with their grandchildren to Europe.
She is survived by sisters Barbara and Joyce, brother Garnett, and grandchildren Stephanie Shira and Griffin Shira.Her last days were spent at Savannah Place on James Island, where she was lovingly cared for.
To order memorial trees or send flowers to the family in memory of Gwelda Casoli, please visit our flower store.