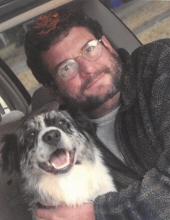 James Hampton Baldwin, age 54, passed away on Saturday, November 9th, 2019. James was born in Charlotte, NC on February 17th, 1965 to Oran and Emily Baldwin. He is predeceased by his father Oran and his favorite Aunt Martha. James is survived by his beloved wife Hallie and his son Elliott; mother, Emily; brothers, Oran Jr., Richard and David. He is also survived by many nieces, nephews, cousins and dear friends.
James attended Archibald Rutledge Academy in McClellanville , SC. He graduated Cum Laude from DeVry University with a degree in electronics. After graduation, James worked for Philips Medical Systems, but his real passion was real estate. He became a real estate broker in Asheville, NC for several years. He took his skill and love of fixing things to the next level and began purchasing homes and renovating them for resale.
James met Hallie and moved to Charleston, SC where he added to his vast skill set and became a licensed plumber and electrician, but wires and pipes were only a tiny fraction of James’ talents. He was a first rate craftsmen, a skilled carpenter, painter, mason, and so much more, who could build, rebuild, restore, repair and redesign almost anything. James had an eye for beauty and scale which he used to great effect on all projects he undertook. In fact, his most recent project is the beautiful home in which he and Hallie lived, and celebrated their 8th wedding anniversary this October. This is literally the “house that love built” and stands as a testament to his master craftsmanship and skills.
James was a talented musician who played guitar and sang. He and his wife Hallie loved to sing duets and were a joy to listen to. James had an inquisitive mind and an amazing store of knowledge particularly the US Constitution and its original intent.
James had a love of coastal life and was an avid fisherman and boater. As much as he loved his Lowcountry, James delighted in the beauty of the NC Mountains, and enjoyed frequent escapes to the cabin on Bad Creek with Hallie and their beloved pets; dogs Benny and Poppy and their cats Henry and Oliver.
Most of all, James was a man of the highest integrity, with a kind and generous heart of patience and tolerance. He will be greatly missed by all who knew and loved him.
A Celebration of James’s life will take place Saturday, November 16th at 2:30 PM at the Chapel of Ease in McClellanville, SC. The family would like to invite everyone to stay after the service for a reception and asks that anyone that would like to, to bring some musical instruments for an impromptu jam session at the reception.
For information on ordering flowers visit www.palmettocs.com and follow the link.
In lieu of flowers memorial contributions can be made in James’ name to the Mitchell County Animal Rescue at PO Box 308 Spruce Pine, NC 28777 or website www.mitchellcountyanimalrescue.org., or St. Jude Children’s Research Hospital.
To order memorial trees or send flowers to the family in memory of James Baldwin, please visit our flower store.