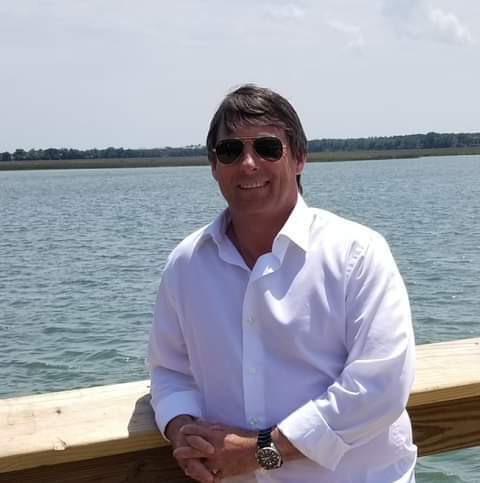 Kenney spent the early part of his childhood in North Augusta and his family relocated to Summerville, SC in 1978 when his father became employed by the Charleston Naval Shipyard. He attended Summerville schools and graduated from Summerville High School in 1985.

Those who knew Kenney (and there were many) remember that he always such fun to be around and that he never met a stranger.  He was quick with a joke or funny comment and brought the fun and joy to any gathering he was a part of.  Family and friends all describe him as having a big infectious smile, being funny and smart and just an awesome guy who was so much fun to be around.

Kenney was able to retire early and spent time doing what he loved most which was being outdoors in the beautiful Lowcountry. He loved boating and exploring the coast and just simply being on or near the waters of Charleston and Beaufort, SC.  He also loved his Clemson Tigers!  He was a lifelong fan and took any opportunity he could to go see the Tigers play.

Kenney served in the Army for 4 years after graduating from High School.  He was in the Armored Division and assigned to M1A1 Tanks.  He was very proud to call himself a Tanker! Two of those years he was stationed overseas in Erlangen, Germany.  After the four years active-duty stint Kenney joined the National Guard and was reactivated for a short time during the Persian Gulf War in the early 90’s.  He was later activated in 1999 during the Kosovo campaign in which he earned a NATO Medal/Kosovo Campaign Medal and Overseas service ribbon.  When he was not serving his country, he worked in the Chemical Manufacturing Industry.  He earned numerous promotions and accolades throughout his career and received Industrial Fire Training through Texas A&M University.

Kenny had most recently volunteered locally for a group called Veterans Serving Veterans where he was able to give back to Veterans in appreciation of their Military service which he was so proud of himself.

Arrangements: A small private military service will be held at Beaufort National Cemetery with a Military Honor guard presiding.

For anyone that would like to donate in honor of his life and love of the military the family would ask that donations be made to the Veterans Serving Veterans Foundation in his honor.

To order memorial trees or send flowers to the family in memory of James Kennedy Broderick, please visit our flower store.