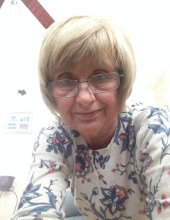 Janet Durante age 74, the daughter of the late Clarence and Sonia Trout, passed away peacefully on May 8, 2021, at Bon Secours St. Francis Hospital with her family by her side. Along with her parents, Janet was preceded in her death by her husband Ronald “Ronnie” Durante and her beloved furry companion, Dudley.

Janet is survived by her daughters, Missy Durante (Shannon) and Linda Jackey (Chris) as well as one grandson (Foster).


Janet's wishes were to be cremated, the family will hold a private memorial in her honor at a later date.
To order memorial trees or send flowers to the family in memory of Janet Mauger Durante, please visit our flower store.