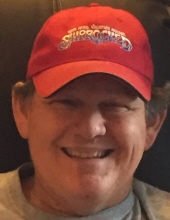 Finally free of pain and breathing without difficulty, Jeffery W. Fersner, 57, died peacefully on Friday, August 3, 2018, surrounded by his wife and friends who loved him. Jeffery was born on December 8, 1960 in Orangeburg, SC to parents, Betty Jo and John David Fersner, Jr.

His academic accolades were many both at Orangeburg-Wilkinson High School and at Clemson University where he studied mechanical engineering. He used that knowledge in his work as a nuclear engineer at the Charleston Naval Shipyard, a general engineer at Lockheed Martin in Orlando, Florida, and a cost engineer at the US Army Corps of Engineers, Charleston District.

Though he was often known as the “smartest guy in the room,” his family and his multitude of friends knew him as funny, fun-loving, and vibrant who was “just happy to be here.” He survived juvenile diabetes, beat both diabetes and kidney disease with a kidney-pancreas transplant, and took on a leg amputation with a positive attitude few would be able to muster. Cancer, however, is a brutal foe. Seemingly out of nowhere, it ran him over like a Mack truck.

Preceded in death by his parents, he is survived by his wife of 25 years, Mary Ogden Fersner, brothers, John David Fersner, III (Peggy) of Greensboro, NC, Joseph Julian Fersner of Mt. Pleasant, SC, and sister, Julia Fersner Walker (Ron) of Waleska, GA. Also surviving are nephew, Conner G. Fersner of Nashville, TN, and niece, Alexandra S. Fersner of Richmond, VA. Heartbroken as well are his tribes of friends throughout the United States, Canada, and over the world beyond.

A Celebration of Life will be held, to be announced at a later time. In lieu of flowers, memorial donations may be made to the health charity of one’s choice or to Pet Helpers, 1447 Folly Rd. Charleston, SC 29412.

Expressions of sympathy may be viewed or submitted to www.palmettocremationsociety.com