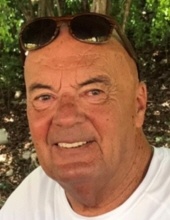 John Phillip Madey of Pawleys Island, SC passed away on Friday, March 13th at MUSC in Charleston, SC. His death was unexpected.

John was born in Manhattan, NY on December 29, 1946. He grew up in Brentwood, NY. He was the only son of Mary and Walter Madey who both proceeded him. He served in the Army and received a bronze star during his tour in Vietnam.

John was a devoted husband, father and grandfather. He loved a good laugh, the beach, fishing, boating, watching football with a cold PBR and spending time with his family.

A celebration of life is in the process of being planned by the family.
To order memorial trees or send flowers to the family in memory of John Phillip Madey, please visit our flower store.