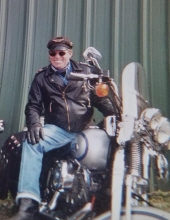 NORTH CHARLESTON - John Wesley McMillan, III, 70, passed from this life on Thursday, July 23, 2020 following an illness. Born on November 21, 1949 at Camp Whiteside, Fort Riley, Junction City, Kansas, he is the son, of Retired MajorJohn Wesley " Jack " McMillan, Jr. and Margaret Louise Drew McMillan. John attended and graduated from the Junction City High School class of 1968, he then went on to college st Kansas State University and then to Washburn University and finally finishing his studies at the South East Community College in Milford, Nebraska. John later went to work as a Metal Fabricator where he came to Master his craft. He also worked as a Manufacturing Engineer and Designer as well as a draftsman. He worked last for Milcom Systems where he retired with 20 years of service.

During his life, John enjoyed Riding, Building and Restoring Harley-Davidson Motorcycles and he did it for nearly 55 years. John is preceded in death by his parents, his sister, Barbara Ann McMillan and his brother, Darrel H. McMillan. He is survived by his sons, John Wesley McMillan, IV, Niles Edward McMillan of Portland, Oregon and Michael Redwood of Litiz, Pennsylvania; his daughter, Kathleen Lynn Baker of Holdenville, Oklahoma; his sisters, Deloris Gary of Kansas City, Missouri and Margaret McMIllan of Lincoln, Nebraska and his grandchildren, Jack Wesley McMillan and Lucy McMIllan both of Lenexa, Kansas. John is also survived by his Beloved ex wife, Glenna Carter and his friend's of Bill W.'s for twenty-eight years.

Please remember John for the memories he made and the times her shared. Arrangements are with the Palmetto Cremation Society in North Charleston
To order memorial trees or send flowers to the family in memory of John Wesley McMillan, III, please visit our flower store.