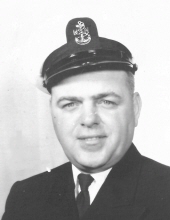 Joe was born in Middleport, PA on June 22, 1925. When he was 12 years old he moved to New York City to live with his mother. It was there that he met and married his teenage sweetheart Patricia Dye on November 5, 1946.

Joe joined the Navy and during his more than 20 years of active duty, he and Pat were stationed in many places in the United States and abroad. He retired in 1963 with the rank of Chief Petty Officer. He worked at the Charleston Naval Shipyard in the Supply Department until his retirement from Civil Service in August of 1980. Upon retirement from Civil Service he was employed as an independent consultant for 10 years.

Joe was a life member of the Elks Lodge 242 of Charleston where he enjoyed playing golf on Tuesdays and being a member of the bingo and food committee.

They family would like to thank Dr. Charles Smith, the medical staff at Roper St. Francis 4HT and Roper Hospice Cottages for the compassionate and loving care they each extended during his brief illness. A memorial donation may be made in his honor to Roper Hospice Cottage in Mt. Pleasant or the Elks Lodge 242 in Charleston.

A private family memorial will be held in November.

Online condolences may be shared or viewed at www.palmettocremationsociety.com
To order memorial trees or send flowers to the family in memory of Joseph Leslie Baldesari, please visit our flower store.