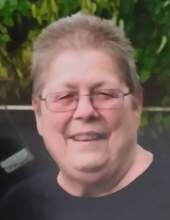 Joyce was born on August 13, 1950, in Louisville, KY, to Kenneth and Etola (Self) Ezell. She resided in the Louisville, KY and Jeffersonville, IN area for the majority of her life. She spent the last seven years in Charleston, SC to be close to her son and grandchildren, whom she loved dearly. Joyce retired from Norton Healthcare after many years of service. She was also employed by Clark Memorial Hospital for several years.

Joyce loved animals, especially her many dogs and cats that she had over the years. Her kind heart extended to her friends and family and there was rarely a time that you spoke to her without hearing, “I love you,” before hanging up the phone or walking out the door. She adored her grandchildren and loved spending time with them.

Joyce was preceded in death by her parents, Kenneth and Etola (Self) Ezell, her husband, William “Bud” Griffin, and her son, Chris Griffin. She leaves to cherish her memory, her grandchildren; Jacob “Jake” Griffin and Allison Griffin; siblings, Kenneth Ezell Jr. (Karen), Evelyn Rone (Charles), and Mike Ezell (Pam),and aunts Shirley Fulton and JoAnn Self. She also leaves behind a host of nieces, nephews, family and friends who will miss her.

Per her wishes, Palmetto Cremation Society of North Charleston, SC has been entrusted with her cremation. Her ashes will be spread in a river leading to the ocean where her husband’s and son’s ashes were previously spread.

Her family will be hosting a memorial service for her in Kentucky on Sunday, April 3, 2022 at 2:00 at the Aahmed Grotto located at 10703 West Manslick Rd. in Fairdale, KY. Friends and family are invited to attend a short memorial service followed by a dinner.

To order memorial trees or send flowers to the family in memory of Joyce Lee Griffin, please visit our flower store.