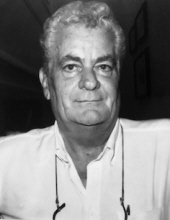 Kyriakos Papadimitriou AKA “Mike Pappas” passed away with his daughters by his side on February 13, 2019.

Born April 20, 1930 in Casablanca, Morocco of Greek parents, he was the oldest of five children born to Pantelis Papadimitriou and Stamatina Dourou Papadimitriou.

He was raised in occupied Greece during WWII, and served in the Foreign Legion, as well as in the Greek Air Force during the Korean War. He reluctantly spoke of things he experienced in war. Mike completed his professional education in Lausanne, Switzerland classically trained in hospitality. He became a Master Chef, and enjoyed a full and adventurous career including the distinction of being a private Chef for Aristotle Onassis.

During the time when cruises were the elite method of transit, Mike became an officer for a Greek Cruise Line where he met his former wife, a passenger, Mary Alice “Cookie” Papadimitriou by literally running into her. Life Magazine later published the tale of how Mike survived the sinking of the Lakonia which caught on fire at sea. Mike continued his life at sea on a variety of cruise lines until he moved his family to the Low Country in the late 1960’s. Mike proudly became a US Naturalized citizen in 1969.

Pappas, as many called him, began his career in Charleston as the Manager of the Charleston Country Club. Mike loved the Low Country and most especially the Charlestonian people he came to hold very dear. He, along with a handful of other Charleston Chefs, paved the way for the food scene for which Charleston is now renowned. He was a founding chef and restauranteur opening The Colony House (now The Harbour Club), Poogan’s Porch, The Marina Variety Store, Fiddler’s (now Crabhouse), and Pier 61 (now Blue Rose) with endearing partners.

Mike is survived by his former wife, Cookie and their two daughters Kathleen M. Papadimitriou, known to most as “kp” and Judy M. Papadimitriou fondly referred to as Judy Pop. One of his proudest accomplishments was when his daughter Judy, defied him and followed in his footsteps, embarking on a career as an Executive Pastry Chef.

Mike is also survived by his two dedicated sisters: Kyriaki “Koula” Kordonis married to his dear friend, now deceased, Frank Kordonis, and Ekaterina “Katie” Papadopoulous married to E. “Louis” Papadopoulos of Warrenton, VA as well as his nieces and nephews: Lena and George Vozikis, Matina Kordonis, Pano and Angela Kordonis, Louizos and Alex Papadopoulos, Matina and Jim McGrath and their children and grandchildren. He is also survived by his niece Amy Koch McCasland and nephew John and Patricia Koch and their children.

Mike was a dedicated Fisherman and longstanding member of the Charleston Yacht Club.

The family kindly requests, in lieu of flowers, donations be sent to either the Ronald McDonald House Charities of Charleston www.rmhcharleston.org or the building campaign of the New Hellenic Center www.helleniccentercharleston.com/.

The burial will be private but the family invites friends to join them at the Charleston Yacht Club on Friday, February 22 from 4:00-6:00pm.
To order memorial trees or send flowers to the family in memory of Kyriakos Papadimitriou, please visit our flower store.