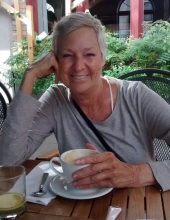 Lynda LaRoche was born May 23, 1947, in Urbana, Illinois, to Alice and Lawrence Robert LaRoche. She grew up in Amarillo, Texas. Lynda received a BFA in 1971 in Painting from the University of New Mexico in Albuquerque, New Mexico and an MFA in Jewelry Design and Metalsmithing in 1976 from Indiana University (IU) in Bloomington, Indiana.

Minimalism was the guiding principle of Lynda’s artistic expression and she considered herself to be a Modernist and a Reductionist as well. She promoted contemporary jewelry as an artform. Lynda’s mentor at IU was Professor Alma Eikerman, who brought a Scandinavian modernist sensibility to her teaching enhanced by study in Denmark in the early 1950s with Silversmith Karl Gustav Hansen. Additional influences to Lynda’s art practice were fiber artist and colorist Dianne Itter who she worked with at IU and painter Agnes Martin. Lynda’s approach to subtleties of texture, light and simple geometric form came in part from these two influences. Lynda had a wonderful grasp of Art History and continued to take classes beyond those required for the MFA. She pursued historical research throughout her career especially in Architecture, Photography, Japanese Art and African Art.

Lynda celebrated a successful career in Bloomington, Indiana for many years along with then-husband David L. Rodgers; Lynda in jewelry and David in sculpture. Lynda owned a gallery, LaRoche LTD, in Bloomington, for 18 years, focusing on one-of-a-kind contemporary jewelry and table objects. She produced jewelry and hollowware for galleries and commissions. In Indianapolis she was a frequent curator of contemporary jewelry shows at Artifacts Gallery and was Director of the Jewelry Room there. Lynda’s work has been displayed across the country and in Japan. In addition to five fellowships and grant-funded projects, she had a visual arts fellowship with the National Endowment for the Arts in 1988-89. The latter is one of the highest distinctions for a practicing artist. She worked as a visiting assistant professor at schools including Indiana University in Bloomington, Miami University in Ohio and Montgomery College in Maryland.

In 2005 after supervising graduate student Shannon Xin Guo’s MFA at IUP, Lynda was invited to give lectures and workshops to the Graduate Jewelry and Metals Program at the College of Fine Arts at Shanghai University. Today Shannon Xin Guo currently is Director of Jewelry and Metals at the College of Fine Arts of Shanghai University.

Lynda served an elected term from 1989 to 1991 on the Board of Directors of the Society of North American Goldsmiths (SNAG). Among her achievements as a board member was the task she undertook to form SNAG’s Educational Endowment Scholarship Fund. Endowment funds continue to support deserving and talented students so that they may pursue the same passion for metal and jewelry design that Lynda embraced. Students have benefited from Lynda’s hard work since 1992 when SNAG awarded its first scholarship. Lynda’s business acumen helped SNAG gain and maintain a sustainable footing as a 501(C)3 public not for profit organization.

In 2011 Lynda was awarded NICHE Magazine’s “Art Educator of the Year” award. The “Art Educator of the Year” award was established to recognize those who have dedicated their careers to nurturing and guiding the next generation of craft artists. Professors are nominated by their students, and the recipient is chosen based on student essays. It is open to all art educators in North America. In the essay nominations, Lynda’s students described her as, “not only instilling a sense of design and appreciation for craft within everyone, but also having a desire to push each creative project to the next level.” Two of her MFA students, Erin Knisley of Sidman, PA and Bifei Cao of Beijing, China were finalists that year in the student category of the NICHE Awards. Erin Knisley today is Program Manager of Halcyon’s Arts & Education Initiatives in Washington, DC and Bifei Cao is Associate Professor in the School of Art and Design, Guangdong University of Technology in Guangdong Province China. Many of Lynda’s students have become leaders in Jewelry and Metals, contributing to the legacy and history of the field as artists, craftsmen, teachers, department heads and leaders of SNAG. As Brian Ferrell, a student of Lynda’s at IUP, current Associate Professor of Art at Seton Hill University and current President of SNAG noted, Lynda LaRoche is an important part of the “metals family tree” and a significant link in the chain of studio craft educators.

Lynda met the love of her life, David Beard, shortly before retirement. After her retirement she was diagnosed with multiple myeloma, and was cared for by David Beard, and her cousin Carol Skinger and her husband John Horn. Following successful treatment in Pittsburgh, Lynda and David realized their dream retirement, sharing Lynda’s home in Pawley’s Island, South Carolina, near her cousin Nancy, and David’s home in Abbot, Maine.

Lynda was preceded in death by her parents Alice (2010) and Lawrence Robert LaRoche (1951).

Should friends desire, contributions may be made to