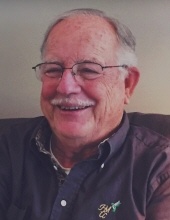 Pete would not have wanted his death to result in any sadness as he is now one of the vocalists for a big band in Heaven singing for his Lord. Pete loved the Lord but more importantly, he knew that the Lord loved him.

One of twelve children born into poverty in a small town in Iowa, Pete left home at sixteen to widen his world and, that, he certainly did. Rising above his circumstances, Pete became a proud twenty-year Army and Air Force veteran which included a tour as a medic in Vietnam and work as a trainer for the Air Force Academy Hockey Team. After retirement, Pete and Dianne lived in St. Petersburg, FL, Wilmington, NC, and their beloved mountain home in Roaring Gap, NC.

Pete loved music, sports, laughing, and was the life of every party. He is survived by his wife of 53 years, Dianne, two children Heather (Chris), Mark (Lucila), and two grandchildren that he adored, Carson and Mary Reagan.

He leaves behind countless family and friends in Iowa, Florida, North Carolina and beyond who were benefactors of Pete’s humor and encouragement.

Immediately after his passing, Frank Sinatra appropriately played on the radio giving consolation to his family providing testament that Pete’s sense of humor is eternal.

Services to follow at a later date. Many thanks to his care providers during his journey home.
To order memorial trees or send flowers to the family in memory of Marvin Leroy Hocamp, please visit our flower store.