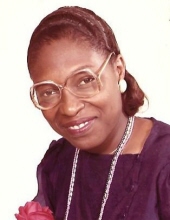 Mary Lee Smalls was born January 3, 1951 to the late Agnes (Easter) Smalls and Winfield J. Smalls of Edisto Island, South Carolina. She was the youngest of five children. She departed life on December 22, 2018 in Charleston, South Carolina where she resided for most of her adult life.

Mary spent several years in the state of New York before enlisting in the United States Army. While in the Army she worked as an administrative specialist, and she attained the rank of a non-commissioned officer. She was also employed by the Veterans Administration Hospital in Charleston, South Carolina for a number of years.

Mary was twice united in holy matrimony. No children were born into either of the unions, and unfortunately each marriage ended in divorce.

Mary was a freedom loving, independent person who loved flowers, and enjoyed visiting the sick. She was a private person with few associates who knew her well. She collected phrases and written artifacts that inspired, motivated and/or provided her with insight. Old letters, clippings, and inspirational expressions gave her solace.