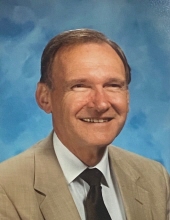 Nelson was born on October 25, 1927, in Ridley Park, PA, the son of Maurice N. Durand and
Caroline Bacon Durand. He was the loving and devoted husband and is survived by his wife of
nearly 70 years, Gladys Myers Durand. He was the loving father of three children, Edward and
his wife June Durand, Lynn and his wife Jane Sullivan-Durand, and Ruth and her husband Todd Hoover. He will also be fondly remembered by his nine grandchildren Nicole, Wesley, Naomi, Laura, Alex, Anya, Sasha, Nicholas, and Christopher, and by his four great grandchildren Addy, Lilah, Austin, and Sarah.

After serving in the U.S. Coast Guard in World War II, Nelson graduated from Penn State
University in 1950 with a B.S. in Forestry, earned a teaching certificate from Millersville State
Teachers College in 1952, and earned an M.Ed. from Penn State in 1953.

After seven years as a science teacher at East Pennsboro High School, he began a long career at Milton Hershey School in Hershey, PA in 1959 as a teacher. The school serves disadvantaged youth and includes a residential component for its students, and for several years Nelson and Gladys served as houseparents for one if its student homes. Nelson was quickly promoted to Director of the Junior and Intermediate Home Life Division, and in 1965 became Director of the Intermediate Division, including both home and school operations. He served as Director of Intermediate Education from 1984 until his retirement in 1992, having helped to shape the lives of over 4,000 boys and girls in the innovative education programs that his team created (and knowing every one of those students by name).
Nelson also served as the president of and a Paul Harris Fellow in the Hershey Rotary Club, and a board member of the Pennsylvania Association of Private Academic Schools, the Central Pennsylvania Blood Bank, the Dauphin County Partnership for Aging, and the Derry Township Senior Citizens Council. He has been active in his churches, First United Methodist Church in Hershey, and later Sunrise Presbyterian Church in Sullivan’s Island, and devoted many hours of volunteer service to the Seafarer’s Ministry at the Port of Charleston.
After retirement, Nelson and Gladys lived for a few years in Hershey, then moved to Mount
Pleasant, where they have resided since 2003 in the Franke at Seaside community. Nelson will be deeply missed by his family, friends and all who he influenced throughout his life, and he never faltered in maintaining his attitude to “accentuate the positive.”

A celebration of Nelson’s life will be held at a date to be announced in the future. Instead of
flowers, gifts in memoriam may be given to the Milton Hershey Alumni Association in Hershey,
PA, the Charleston Port and Seafarers’ Society, or Sunrise Presbyterian Church in Sullivan’s
Island.
To order memorial trees or send flowers to the family in memory of Maurice Nelson Durand, please visit our flower store.