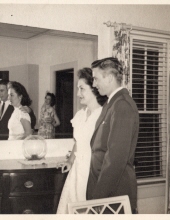 She was one of three daughters raised in Clifton, South Carolina where her father was the Electrical Superintendent for three textile mills. She learned to play the piano, a skill she developed throughout her life. Her mother, Gladys Chamberlain of Morristown, Tennessee, taught her daughters how to sew and make their own clothes

Mildred graduated Valedictorian from Cowpens High School in 1940. She received an Associates degree from Anderson College two years later. While employed at the Soil Conservation Service in Spartanburg, she met and married Thomas Oregon Lawton Smith who graduated from Spartanburg High School in 1936 and served in the US Navy at Pearl Harbor beginning in 1942.

Mildred and Tommy raised two sons, David Lewis Smith and Paul Bryan Smith. Initially, they lived in Spartanburg and in 1962 moved to Summerville when Tommy started a job at the Charleston Air Force Base. She faithfully loved and cherished her husband and mourned his passing on December 26, 1962. She worked as a secretary to the principal of Summerville Junior High School and later began working at the Charleston Naval Shipyard. She focused her life on her two sons of whom she was very proud. Both graduated from Summerville High School and went on to receive Master’s degrees, one from the Citadel and one from the University of California.

Mildred’s last position was Secretary to the Inspector General, Headquarters, Sixth Naval district. She loved working with the young captains at the district headquarters.

In addition to her husband and parents, she was preceded by her sister Mary Beatrice Lewis. She is survived by her sister, Martha Jo Downes of Santa Rosa, California, her two sons, four grandchildren and four great-grandchildren.
To order memorial trees or send flowers to the family in memory of Mildred Lewis Smith, please visit our flower store.