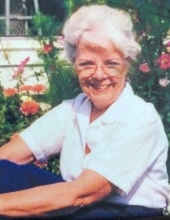 Nola was born in Haslett, Michigan on February 20, 1930, to Leon Schafer and Bertha Brainerd Schafer. She graduated from Haslett High School in 1948. She sang in choirs and musicals where she held many lead roles. In her senior year, she was asked NOT to audition – to “let someone else have a chance”. She was THAT good. And as that extraordinarily gifted singer, she and her dad performed at night clubs in the Lansing area, her dad at the piano.
During the summer of 1948, Nola accepted a job as a vocalist for the Sammy Fletcher Band in Grand Haven, Michigan. While on stage for the first time, a certain trumpet player in the band fell deeply in love with her – from the back – he said, “she glowed!”

Joseph Robert Scannell (Bob) and Nola were married that December in Marshall, Michigan. While in Lincoln Park, their family grew and with 5 children under foot, they needed a bigger house. In 1964 they moved to the northwest side of Detroit – the Old Redford area. There Nola nurtured her inner gardener and planted beautiful flowers and vegetables. During the 1960s she was an avid “health food nut” long before it became a fad. A trailblazer through and through.

Continuing her love of singing, in the 1980s she, Bob, son Jeff and daughter Tammi sang in a quartet with The Ambassadors led by Al Townsend. Favorite tunes included “I Like New York In June, How About You?”, “You Do Something To Me”, “Lately”, “If I Were a Bell”, and many more.

After all the children had flown the coop, they moved to Stockbridge, Michigan in 1983. They raised chickens, tended even more vegetable and flower gardens, and Nola continued to design and sew quilts that her family all cherish to this day. She and Bob sang in the Stockbridge Presbyterian Church choir until 1996 when they moved to Charleston, South Carolina. Nola’s artistic talent truly blossomed as a painter, winning many ribbons and trophies at local fairs. Her leadership skills were greatly appreciated at the Berkeley County Seniors Center where she led in all sorts of projects ranging from painting, to sewing, to making Christmas ornaments for the Center to sell. Bob was also heavily involved with the Center, making many of the ornaments out of wood that subsequently would be painted by Nola and the other members of the group. These were surely precious years of working together and sharing gifts and talents.

No words are grand enough to describe this amazing woman. She was the consummate counselor to her loving children. She had many “Nolaisms” at the ready when one needed advice.

She and Bob were quick to laugh and sing. Their favorite song was “I’ve Got A Crush On You”. A recording of Nola singing and Bob playing flugelhorn can be heard here by highlighting the link, Right clicking on it and select the "Go To" option.

The arrangement was written by their son, Jeff.

Bob loves to tell the story about a conversation/debate they had regarding “what makes people smart”. With great anticipation of garnering the winning point he said, “You know, Nola, if you were really smart, you’d make ME think that I was the smart one.” Without skipping a beat and with a twinkle in her eye, she replied, “I do, Bob: you’re just too stupid to see it!” And they laughed and laughed… and then they laughed some more..

She is profoundly missed by her family and friends.

A memorial service will be held on Sunday, April 25, 2021 at 2:00 pm at the home of Tammi and Dave Rockey, 200 Pleasant Hill Drive, Goose Creek, SC, 29445. Anyone wishing to attend via ZOOM, please email Tammi at tammirockey@outlook.com

Donations may be made to Habitat for Humanity or the Berkeley County Seniors Center, 103 Thurgood Rd, Goose Creek, SC, 29445.
To order memorial trees or send flowers to the family in memory of Nola Schafer Scannell, please visit our flower store.