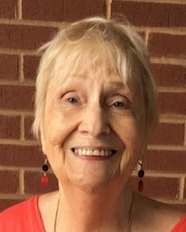 Pat, or Patsy as family called her, was born in Brunswick Maine on September 20,1939. She had a quick mind and a dry sense of humor — or I should say humour as Pat loved all things British. She knew all about the royal family and watched Queen Elizabeth’s funeral for days. One of her favorite sayings was “Keep Calm & Carry On.” And she did just that.

Pat was the youngest in a family of four. Two older siblings, sister Marilyn and brother Howard, preceded her in death, and one sister, Barbara, survives her. Pat’s mother, known as Dolly, was a devout Catholic who emigrated from Ireland to the U.S. as a teenager. Her name is listed at Ellis Island. Pat’s father, Alfred Fisk Burgess, worked in the textile industry and was frequently transferred to different plants throughout the northeast and the south — and once to Canada when Pat was 10 years old. Pat enjoyed her time there, and when her father was due to be transferred again, she opted to stay with the family of a close friend so she could finish high school.

Pat remained in Canada to get a BA from McGill University, then got a job teaching at Le Rue High School (later called LaSalle Catholic High School) in Montreal, Québec. Pat taught English and Drama and directed many plays. She had a gift for picking the perfect kid for each role. She apparently had a great singing voice, though few (including myself, her niece!) ever heard her since she was so shy. At her retirement, she received dozens of letters from former students praising her for all she had added to their lives. She maintained Facebook contact with many throughout her life.

Patsy finished her career in Montreal, then moved to Seabrook South Carolina to be closer to her sister Barbara. Eventually she moved closer to Charleston so she could more easily enjoy its urban amenities. She volunteered at several places, including Footlights Playhouse, the Manigault House, Patriot’s Point, and the Gibbes Museum of Art. She enjoyed leading tours and sharing her knowledge of history and art with anyone wishing to know more.

Pat loved to get together over coffee to discuss art, movies, and books – specifically mysteries... the darker the better. She would order one black coffee, add water to it and nurse it for hours. She was a wonderful listener and would happily share any wisdom she had on any given topic. One friend described her final visit with Pat… they went to the Van Gogh immersive and had a grand time. Afterwards they shared lunch, and Pat enjoyed a special dessert – a treat she rarely allowed herself but thoroughly enjoyed.

Last but definitely not least, there must be mention of Pat’s pooches. She loved dogs and would invite them onto her lap so she could pet them for as long as they’d stay. Her first in SC was Dusty, a Bichon Frise. Then came Bob Marley, so named because of his hair when she adopted him. Bob Marley’s transformation under Pat’s care earned him a prize spot on the cover of Columbia Metropolitan magazine. Her last beloved dog was also named Bob. She tried to give him a unique name, but she kept forgetting and calling him Bob, so ultimately, she just gave in.

Pat spoke little over her last days, though she did make one poignant vocalization… “Happy Trails”. Perhaps she was thinking of taking Dusty or one of the Bobs out for a walk, or perhaps she was singing the song in that good but seldom heard voice of hers. Happy trails Aunt Patsy….

To order memorial trees or send flowers to the family in memory of Patricia Jean Burgess, please visit our flower store.