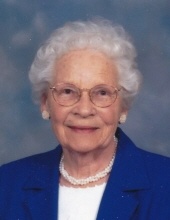 Pauline Carter Graustein passed of natural causes at the age of 100 on December 19, 2020 Born on March 7, 1920 to Lillian and Herbert Carter in Reading, Massachusetts. Pauline was the oldest of six children: Herbert, Elizabeth, Robert, Jean, and David. Jean is the only surviving sibling.

Pauline married her high school sweetheart, Walter W. Graustein, Jr. Her brothers enlisted at the start of World War II and her husband served in the Army Air Corps when they had the first two of four children, Judith and Cariel. After the war, the family lived in Watertown, Massachusetts where Pauline gave birth to her daughter, Janice. The family moved to Bolton, Massachusetts where, Pauline gave birth to her son, Will. Walter created his own, successful electronics manufacturing company where Pauline would often assist in administration. He named the company, “Carter Manufacturing”, after Pauline. Pauline lived in Bolton for over four decades where she made numerous friends and enjoyed the country life. She had a “Green Thumb” and became an accomplished gardener and horticulturist and was an active judge during the annual flower competition at the Bolton Fair. Pauline lived in, and embraced, a century of amazing technological development.

She traveled around the world with family and friends. She continued to practice the artistry and craftmanship from her heritage. She enjoyed braiding rugs made from the worn clothes of her children and she wrote numerous articles for a variety of publications. Her husband died in 1986 and she never remarried. Pauline moved to Charleston, South Carolina in 1988 where she loved the weather, the beach, and the warm southern hospitality. She held a part-time job working as a docent for a nearby plantation where she loved to tour the gardens. In 1999 Pauline moved to the retirement community of Bishop Gadsden where she continued to live a very active lifestyle. She became a Grand Master bridge player and enjoyed all the activities and friendships that southern living had to offer.

Pauline lived a long, happy, and vibrant life. On December 19, 2020, she passed with courage, dignity, and grace, surrounded by her family, and loved ones. She is survived by; three remaining children ( Cariel, Janice, and Will), a sister (Jean), five grandchildren (David, Sara, Stacy, Caitlyn, and Trevor), several great grandchildren, and a lifetime of memories and great friends.
To order memorial trees or send flowers to the family in memory of Pauline Carter Graustein, please visit our flower store.