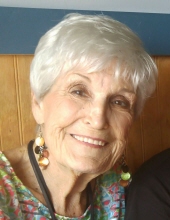 Rosa Nell Chestnut passed away peacefully on June 2, 2019.
Rosa was born in Morganton, NC to John Reid and Geneva Rose Mull Williams.
Rosa had one brother, Truman Williams and three sisters, Avis Williams, Oneida Ollis, Dottie Filiaggi as well as many neices and nephews. She married James Henry Chestnut and had five children, Duke Chestnut, Tammy Cogdill, Abby Travis, Andy Chestnut and Bert Chestnut; two daughter-in-laws, Bobbie Chestnut and Sandy Chestnut; two son-in-laws, Clint Cogdill and Rodney Travis and ten grandchildren Janie, Daniel, Anna, Victoria, Callie, AJ, Major, Maverick, Magnum and Mannix.
Rosa worked at the Holly House as a waitress in her early years and then became the Program Director at the Alcohol Rehabilitation Program at the Naval Hospital at Charleston where she retired after 23 years.
Rosa's passions were spending time with her grandchildren, bowling in the Senior League at Sandpiper Lanes and playing dominos with her friends at the Senior Center. She also loved gardening, reading and Elvis.
Rosa was a friend of Bill W. and Dr. Bob for 47 years and cherished all her friendships that she had developed over the years.
No one loved life more than Rose did. She had an attitude of gratitude until the very end. We will miss her sense of humor and her indomitable spirit. I'm sure God has greeted her in heaven and said, "Well done, Rose, Well done!"
To order memorial trees or send flowers to the family in memory of Rosa Nell Chestnut, please visit our flower store.