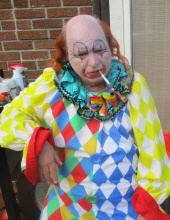 Ross Clark Bacon passed away May 16, 2021 following a short battle with lung cancer. He was born in Upper Darby, PA, the first child of Ross Chidley Bacon and Phyllis Madeline Clarke, both deceased. He is survived by a sister, Barbara Bacon Perkins, and a niece Kathleen Crabtree and her son.

Ross lived in the Charleston, SC area for over 30 years, and enjoyed working as an extra for "The Righteous Gemstones," "Mr. Mercedes" and the movies "Halloween" (2018) as well as "Halloween Kills" (2021).

Ross was a talented, mostly self-taught, musician and polymath. He played guitar, bass, piano, synthesizers and keyboards, for a variety of rock bands and NBC in Los Angeles, CA. Ross recorded the "Bartender Song" and "I Will Not Grow Up" with Big Leg Emma, a band best known for their onstage antics and permanent banishment from the Starwood following a riot over a fake fight with a toupee.

Ross was a longtime collector and dealer of rare records and music memorabilia. He founded both Shyney Records and Carlotta's Records from a recording studio in his home.
To order memorial trees or send flowers to the family in memory of Ross Clark Bacon, please visit our flower store.