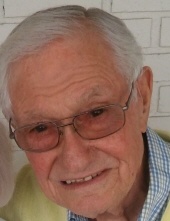 Roy Clyde Hoffman of Charleston, SC passed away on August 28, 2019. Roy was born on June 11, 1926 in Auburn, Indiana. His parents were Darrel Clyde Hoffman and Cleora Selma Hoffman (Wolfe). Roy was preceded in death by his beloved wife, Jule Ann and his sisters Ila (Hoffman) Shutte, Lois (Hoffman) Bockover, Lila (Hoffman) Brannan and brothers Albert Roman Hoffman and Burnel Devon Hoffman as well as brother-in-laws Cecil Bockover, Eugene Brannan and Herb Schutte and sister-in-laws Francise Hoffman and Betty Kunkle. Roy was raised in Auburn, Indiana until he was 8 years old at which time his parents moved to Bryan, Ohio. Roy attended Bryan High School where he participated in many sports lettering in track, football, basketball and baseball. He was a 16 Letterman. During World War II both his brothers and one brother-in-law entered the military this inspired Roy to serve his country, so he left high school to join the Navy. Roy’s mother proudly displayed a 4 star flag on her front porch during the war years. While serving in World War, II, Roy was stationed in Gaum with the amphibious division. After returning home from service Roy was able to complete his high school education. He became engaged to his high school sweetheart, Jule Ann Waldvogel. They were married on June 15, 1947. Because of job opportunities, they moved to Melvindale, Michigan. Roy began working for the Ford Motor Company. He applied and was accepted into the Detroit Police Academy in July of 1949. At that time Roy and Jule Ann moved to Detroit, Michigan. Roy served for 26 years on the Detroit Police Force and retired as a Sergeant Detective. After retiring, from the police force, Roy had a second career as Head of Security for Rockwell Automotive Division in Troy, Michigan. Roy continued his work at Rockwell as an Assistant to the CEO until his full retirement at age 62. He and Jule Ann then moved to Charleston, SC where he enjoyed many happy years playing golf, traveling to their cottage in Michigan, playing bridge, square dancing, traveling around the world, watching his grandchildren grow and of course his church, Westminster Presbyterian. A proud moment for Roy was getting a hole in one at the age of 85 while playing golf at Shadowmoss Golf Club in Charleston.

Roy Clyde’s memorial service will be held at Westminster Presbyterian Church at 1157 Sam Rittenburg Blvd in Charleston, SC 29407 on September 26, 2019 at 2pm.

In Lieu of flowers, donations may be made to the Westminster Presbyterian Church.
To order memorial trees or send flowers to the family in memory of Roy Clyde Hoffman, please visit our flower store.