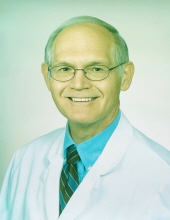 Mr. Sidney James Smith, age 83, of Charleston South Carolina passed away Sunday, April 10, 2022.
Mr. Smith was born on November 4, 1938 in Fairburn, Georgia the son of the late Sergeant Major Russell Smith and Marian Bearden Smith. He graduated from the University of Georgia, College of Pharmacy and retired as a Pharmacist at the Children's Hospital of MUSC. As long as he was able, he was a volunteer pharmacist with Harvest Free Medical Clinic and also participated in the Meals on Wheels program.
He was deeply devoted to his wife, children, and grandchildren. He was passionate for his country and lived for a Georgia football game. He will be greatly missed.
Survivors include his wife of 61 years, Margaret Joan Smith; daughter and son-in-law, Diane Smith Craigie (James) of Charleston, SC; son, Sidney Jarard Smith of Adams Run, SC; grandchildren, James Connor Craigie, Caroline Margaret Craigie, and Garrett Palmer Smith; brother-in-law Clarence "Fin" Finleyson, Jr. He was preceded in death by his brother, Douglas Smith, and sister, Helen S. Finleyson.
Due to his wishes his body was cremated and a service will be held Friday, April 22, 2022 at the First Scots Chapel at 1:00 p.m and then gather at Fellowship Hall.
In lieu of flowers the family asks that donations be made to a charity of your choice.

To order memorial trees or send flowers to the family in memory of Sidney James Smith, please visit our flower store.