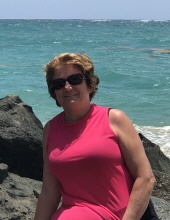 Stephanie “Penny” Gail Dresp was a deeply devoted daughter, mother, grandmother, sister, aunt and friend to many. While she left this world suddenly on August 17, 2021, her loving heart will always be a beacon of light for all who had the honor and privilege to know and love her.

She was born to Stanley Edward & Gloria Irene Maszczak on May 31, 1956 in Fitchburg, MA. She was one of seven children, and family was the fiber of her being. Her hobbies included traveling, smiling, laughing and loving life. She had a passionate love affair of cruising and the luck of a leprechaun. Her smile could light up any room that was graced by her presence and will be sorely missed. She spent many years in Bingo, which lead to life long friendships/relationships who became like family.

A celebration of life will be scheduled and announced at a later time.
To order memorial trees or send flowers to the family in memory of Stephanie Gail Dresp, please visit our flower store.