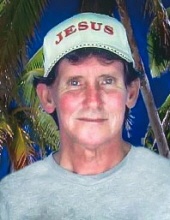 Stephen Bruce Allen, formerly of Plymouth, MA passed away in Charleston, SC on May 14, 2021. In his last weeks, his daughter, Stephanie Brittany Allen, of Lancaster, SC helped him to get the medical treatment that he needed for his heart. He was not alone at his passing, along with Stephanie, he had his son, Stephen Gordon Allen, his oldest sister, Sandra Lee Brogan, and his younger brother, Peter John Allen, all of Plymouth, by his side.

At Stephen’s passing, the Chaplin of the Ralph H. Johnson VA Medical Center offered the family prayer and the opportunity to walk with Stephen’s flag-draped body to the morgue. Stephen’s brother, Peter, sang the 23rd Psalm and Psalm 91 as they proceeded. Taps was played as a salute to this former serviceman. It was goodbye for now.

Stephen was born in Brockton, MA on July 20, 1952. He was the third child, the first son of a loving mother, the late Geraldine Mary (Shores) Allen, and father, Bruce Gordon Allen. He grew up in West Bridgewater on a small family farm and helped with the care of the family’s animals. He and his siblings belonged to the 4-H Club, took care of and showed sheep in the local fairs. Stephen and Peter were featured in a photograph holding two sets of twin lambs that appears in History of West Bridgewater by James Benson. Stephen attended West Bridgewater public schools and he graduated in 1970. He was popular in high school and was nicknamed “Hippie”. His main interests were Art and Music.

After school, Stephen joined the Army and served his country in Darmstadt, Germany. He used his artistic talent to paint murals and signs throughout the U.S. Army base.
When his time in the Army was complete, Stephen worked professionally painting houses, starting a painting company with a friend.

It was around this time that Stephen had a spiritual turning point in his life. He had deliverance prayer which helped set him free and he received Jesus Christ as his Savior and Lord. He studied the King James Bible, reading and praying often for hours at a time. He was an ardent prayer warrior. Towards the end of his life, he became a street evangelist, using signs he made and urging people to come to Jesus.

Stephen traveled to Belize in Central America. It was there that Stephen met and married his former wife, Violet Williams. He adopted her daughter, Shadeni Primrose, and had his son, Stephen and daughter, Stephanie, of whom he was very proud! Stephen was an excellent Dad. He was strict with his children, expecting a lot of them. Even the neighborhood children respectfully called him “Mr. Steve”.

Stephen started the “Grace of God Graphics” company in Dangriga, Belize to make business signs, boat lettering, etc. Stephen also continued to paint murals for large companies. He left his fingerprint in Dangriga and his work is a testimony to his artistry.

In Belize, Stephen started a local radio program called “Violent Faith Ministries” based on the scripture, Matthew 11:12 “…the Kingdom of Heaven suffereth violence, and the violent take it by force.” The radio program started with Psalm 91, a powerful protective Psalm taped and sung by his brother. Stephen taught the Word of God and encouraged people to receive Jesus as their Savior and LORD. He urged them to read the Word for themselves and to pray. He taught and believed that Christian believers should be doing the same works that Jesus did. Like all true Christians, Stephen suffered persecution for his faith.

Stephen’s other siblings included sisters, Carolyn, and Linda. The late Carolyn Louise (Allen) Mott Collins sadly passed away April 6, 2021, a short time before Stephen. Linda Jean (Allen) Brown of Plymouth is the youngest of the Allen clan. Stephen was part of a large, loving family and he leaves many nieces and nephews, other relatives, and friends.

Stephen was a quietly generous person. He looked for opportunities to help people in need. Should you wish to do something in Stephen’s memory, a simple kindness would honor him and God. Private services for Stephen will be held at a future date. Interment will be at the family plot in the Vine Hills Cemetery, Plymouth, MA.

Stephen Bruce Allen will be missed. If you receive Jesus Christ as your personal Savior, you will see him in Heaven.
To order memorial trees or send flowers to the family in memory of Stephen Bruce Allen, please visit our flower store.