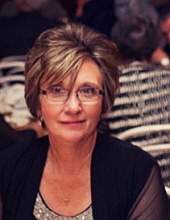 Susan was born December 31,1958 in Long Island, New York, as the daughter of Marie Otter, and the late Edward Otter. She graduated from Shawnee High School in 1976. She worked with her dad at his roofing company. She later moved to Lexington, Kentucky where she met her soulmate, Jerry Huddleston. After dating for some time, Susan and Jerry got married and moved to South Carolina where they had two children. Susan was a devoted wife and mother, or as Susan called it a “homemaker”.

Once her children were grown, she got a job selling fine jewelry. Susan had a gift for selling. Susan eventually stopped selling jewelry to be able to devote her time to her grandchildren whom she adored.

Susan never met a stranger, and her presence was one that no one would forget. Susan’s love for her family and friends was impossible to miss. Susan was a loving wife, mother, meme, sister, and daughter. She touched the hearts of everyone she knew and was a friend to all. She truly was loved by all.

She was preceded in death by her father, Edward Otter.

In Lieu of flowers, please consider a donation too, St. Jude’s Children’s Hospital.

To order memorial trees or send flowers to the family in memory of Susan Mary Huddleston, please visit our flower store.