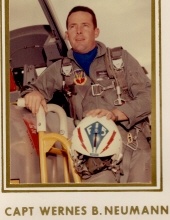 On Tuesday, September 22, 2020, Wernes (nickname Dub) Neumann, husband, father, and son, passed away at 87 years old after fighting dementia for many years. Dub will be forever remembered by his family and friends as a loving and caring father that escaped the "surly bonds of earth" as a USAF Fighter Pilot, and then retired to teach aircraft technology and later GED courses in Texas. Preceded in death by his childhood sweetheart Betty and survived by his children, David (Shirley), Eric, Paul, and Kristina(Trey) along with grand children, Scott and Courtney.
Dub grew up as an outdoors person who enjoyed activities such as hiking, camping, hunting, swimming, bowling, golfing, tennis, and various other sports, but he had a special love of fishing. Being a fighter pilot for 20 years, he was deployed away from his family for long periods and they moved on average every 2-3 years, so it was an arduous career but he made the most of any time with the family. While deployed he took any opportunity to see the sights and get in some fishing. His parents were in Houston Texas, but duty stations were mainly in Arizona and Nevada so twice a year he and his wife Betty would pack up their children for a 1300 mile road trip. In one case Dub was lucky enough to share his military adventures by taking his family with him for a 2 year stay in Morocco Africa, which was one of the most memorable experiences for the whole family. Even after leaving the military, he and his wife had wander lust so they took teaching jobs for the Department of Defense Dependent Schools (DoDDS) in Darmstadt, Germany for 4 years. After settling down in La Grange Texas, Dub maintained his love of fishing by gathering up his wife for a 4 hour drive to Matagorda Texas for some pier/jetty fishing. Due to Dub's degrading mental condition, he and Betty were moved to Charleston SC for their final years to be near their grandchildren. Because Dub maintained an interesting life, his family will sorely miss all the adventures.
Dub and his wife had wonderful memories in many places, but their final wishes were to be buried in the little town of Schulenburg Texas. A small grave side service will be held at the city cemetery sometime in the Fall when the air has a nice chill and a light breeze will remind us all of their wonderful life on the move.
To order memorial trees or send flowers to the family in memory of Wernes Benjamin Neumann, Jr., please visit our flower store.