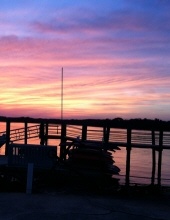 After graduation from Mayesville High School, he attended Clemson College for one year. In World War II, he was in the Signal Corps in the European Theater. He participated in three campaigns and was discharged as a Staff Sergeant in 1946.

He was married in 1947 and attended the University of South Carolina as a veteran student, completing his degree in Engineering in 1950. He worked for the Department of Interior, Geological Survey in Dover, Delaware and then DuPont, retiring in 1985 as Engineering Superintendent in the Textile Fibers Department. He had 33 years of service in Seaford, Delaware; Kinston, North Carolina; Richmond, Virginia; and Chattanooga, Tennessee. He was involved in planning and staffing the Cooper River Plant. He and his family moved to Summerville, S.C. in 1973. They bought a house at Edisto Beach in 1979 and had years of enjoyment there. In 1999, he and his wife moved to the Village at Summerville, joining friends and making new ones.

Mr. Rhodes was a member of Summerville Presbyterian Church. He was a lifetime member of George Miler Country Club where he enjoyed playing golf into his early 90s. He was also a very good bridge player. He was a member of the Gamecock Club since 1960 and for many years he and his wife attended all home and away USC football games. He traveled extensively, both US and abroad. Highlights of his travel were Scandinavia and Kenya.

The family would like to thank the employees of The Village at Summerville, Lutheran Hospice, and Home Instead Senior Care for the outstanding and compassionate care they provided him in his final days.

A private family memorial will be held at a later date. Memorial contributions may be made to Presbyterian Communities of SC Foundation, 2817 Ashland Road, Columbia, S.C. 29210.
To order memorial trees or send flowers to the family in memory of William David Rhodes, Jr., please visit our flower store.